BIOSPHERE SMART HOTEL: TECHNOLOGY IN THE SERVICE OF INNOVATION AND SUSTAINABILITY

The Institute signs an agreement with ASOLAN to promote standards of innovation, technology and sustainability in the sector 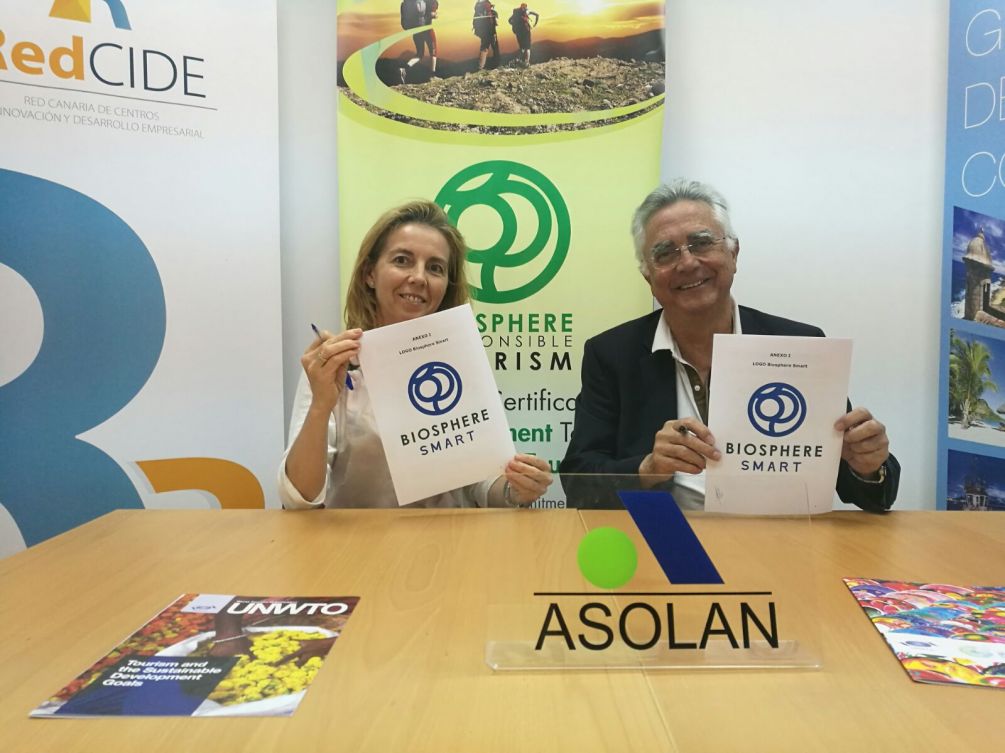 The Association of Hotel and Apartment Companies of Lanzarote, ASOLAN, and the Responsible Tourism Instiute (RTI) have signed a collaboration agreement on Tuesday, under which they are committed to promoting the Biosphere Smart Hotel Certification, a standard that not only implies a differentiation, but also allows the accomodations to make plans to improve their resources, with all the advantages that it implies in terms of innovation, competitiveness and adaptation to the needs of customers.

In this way, both entities wanted to take a step further, making this added value visible in establishments that reach a high technological level by incorporating innovative and technological solutions and tools not only for the internal management and operation of the establishment, but also in equipment and facilities and in the services offered to the client.

The President of ASOLAN, Susana Pérez, stressed that the association has made "an important effort in recent years to promote the development of Smart Hotel, an initiative for which also has the backing of the Island Council of Lanzarote." We are firmly committed to continue betting on innovation and sustainability in the tourism sector. The signing of this agreement is a further step to consolidate our role as a strategic part of the transformation of the industry on the island", Perez said.

The President of the Responsible Tourism Institute, Dr. Tomás Azcarate said that "the basis of sustainability is technological development, as demonstrated by the last Summit of Sustainable Development of Rio de Janeiro." At the same time, he emphasized "the importance of betting on sustainability as a differentiating and positioning element", a commitment to which more and more companies and destinations, like Thompson Okanagan in Canada or Barcelona in Spain are joining, making sustainability the mainstay of its competitiveness ".

It should be noted that the Smart Hotel project are in line with the "Lanzarote Intelligent Biosphere Reserve" program developed by Turismo Lanzarote and contributes to boosting the island as an intelligent, innovative and sustainable tourist destination, being a "Biosphere Destination".

In order to achieve this boost of the tourist destination, it is vital that tourist entities also join in innovation and sustainability, so that companies and their destination, that is, the private and public sector, walk in the same direction of competitiveness .

During these two years five hotels of the island have joined the Smart Hotel System, and it is expected that many more will join in the following years.

Biosphere will soon launch Biosphere Smart Hotel, a system that will allow any hotel in the world to implement a working methodology and requirements to modernize all areas, facilities and processes to increase its competitiveness through technological innovation and sustainability.