Adventure travel, the tourism of the future not only because of the change in consumer preferences, but also for being the most profitable. 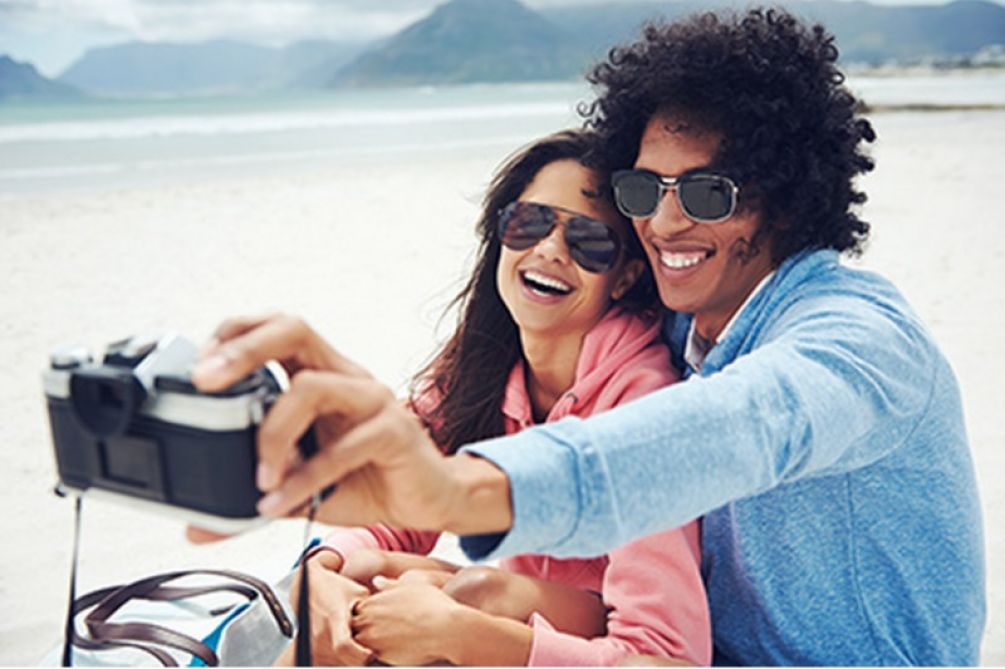 It’s been almost fifty years since tourism was built as we know it today. Like an engineering framework of beams, the major exporters of tourists designed the tourist structures of the recipient countries at convenience, seeking above all minimize the cost at which they could offer their products to their customers. It was the boom of the tour operators, who based their profitability in volume discounts, maximizing their economic benefit through mass production. They only had to send the enough tourists to any destination so the revenue would surpass the cost agreed with the airline.

And the benefits did not end there. If they wanted to extract even more revenue, all they had to do was offer more products and services to the tourists they had already sent to destination. Drowning their clients in complementary offer was easy for companies the size of tour operators. The stay at the hotel was now included in the package, besides the bus carrying tourists there. Tours with one theirs employed guides and meals at restaurants that offered them discounts. Numbers made sense. Customers returned. It was the only way to make the trip of their dreams at a time when any other option was too expensive.

But then they came the low-cost airlines as a result of the lowering of virtually the whole transport sector. Technology had reduced travel costs, and customers supported that change with purchases. Globalization and change of mindset did the rest. Global connectivity not only kept us connected miles away, but also made us more predisposed to mobility. Nomadism was back. Traveling was not a luxury anymore, but almost a human right.

But for a better understanding of the current shift in tourist preferences we must get into some demographic analysis. The generation on which mass tourism has been so far nurtured was the Generation X or Baby Boomers. A demographic cohort in the range of 40 and 70 years of age born at the dawn of contemporary tourism. A generation that did not begin to consume tourism products until they had enough purchasing power to afford them. A generation that fought for and used for the first time the month of paid vacation and whose tourism priorities were mainly rest.

But with the aging of this generation and the gradual increase in the purchasing power of the next one (the so-called Millennials, whose ideologies and consumer preferences were forged during the 2000s), the type and the way people consume tourism have both faced a dramatic change. 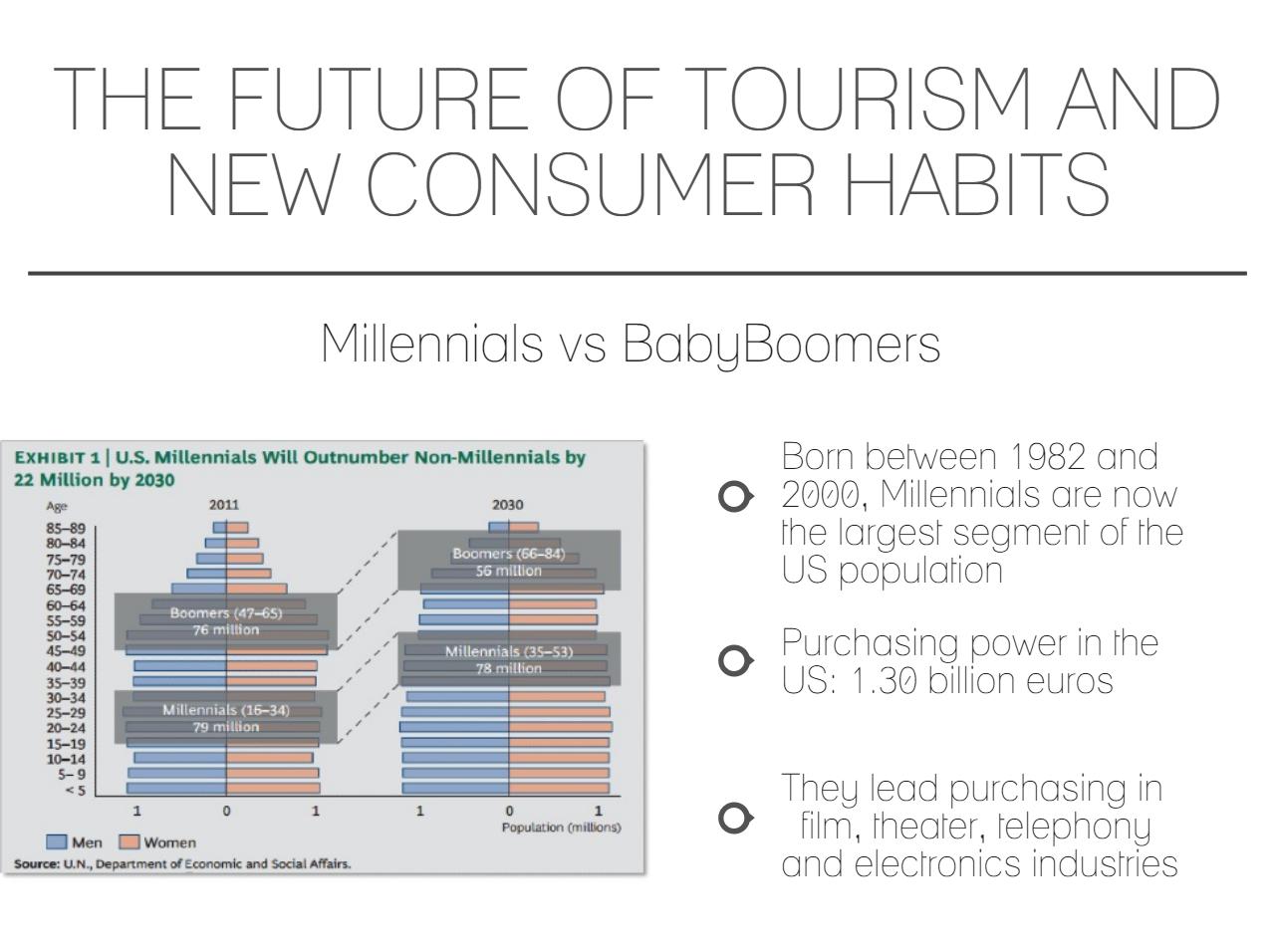 To start with, this new generation did not have to wait to have the money to enjoy sightseeing, as it was coasted by their parents. They have been consuming tourist products ever since they were babies. They have already been several times in standard hotels and apartments for mass tourism. It is not new to them. It is not a need. Past experience has satisfied them completely of usual tourism. Even worse, the emergence of low-cost travel and the proliferation of exchange trips have shown them a much broader catalog of styles of travel, in addition to predispose them more than any other generation to live tourism experiences where comfort and luxury were not only secondary, but even discarded for their excessive cost.

But the willingness to consume less traditional tourism products also comes with a change in the lifestyle of the new generation and the shift of their needs. New generations have grown up in an environment in which technological progress and economic growth has created first in them and eventually in previous ones a completely new need: to rank themselves socially in the new channels of communication. 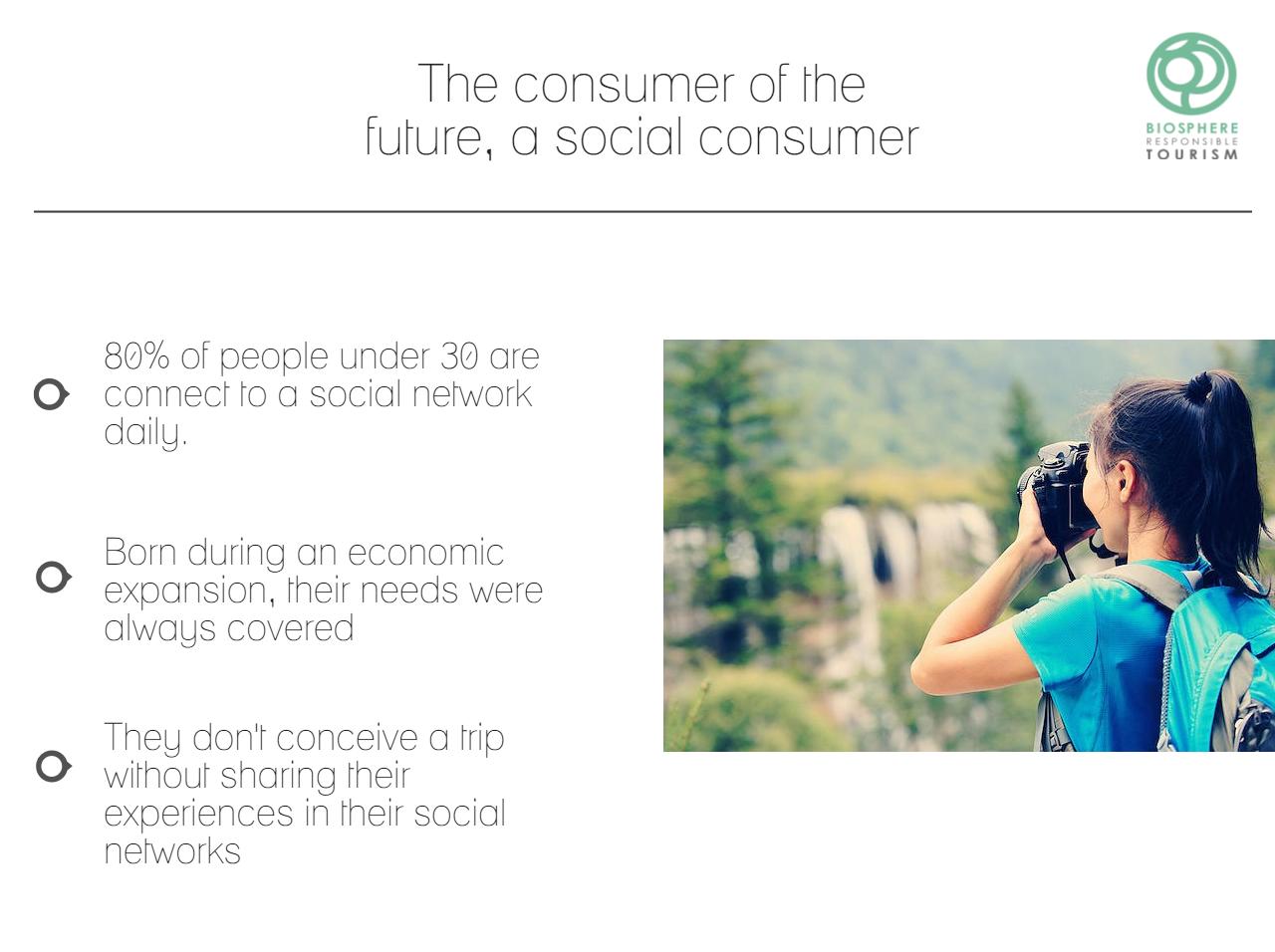 It's often thought that young people feel an almost pathological need of freely destroying their own privacy. Nothing further from the truth. They don't give it away, they sell it. They exchange it for social recognition in an entirely new market (the online) where special moments are worth their weight in likes. Sharing is not the purpose, but the means. It is the fee paid to achieve the admiration they need. 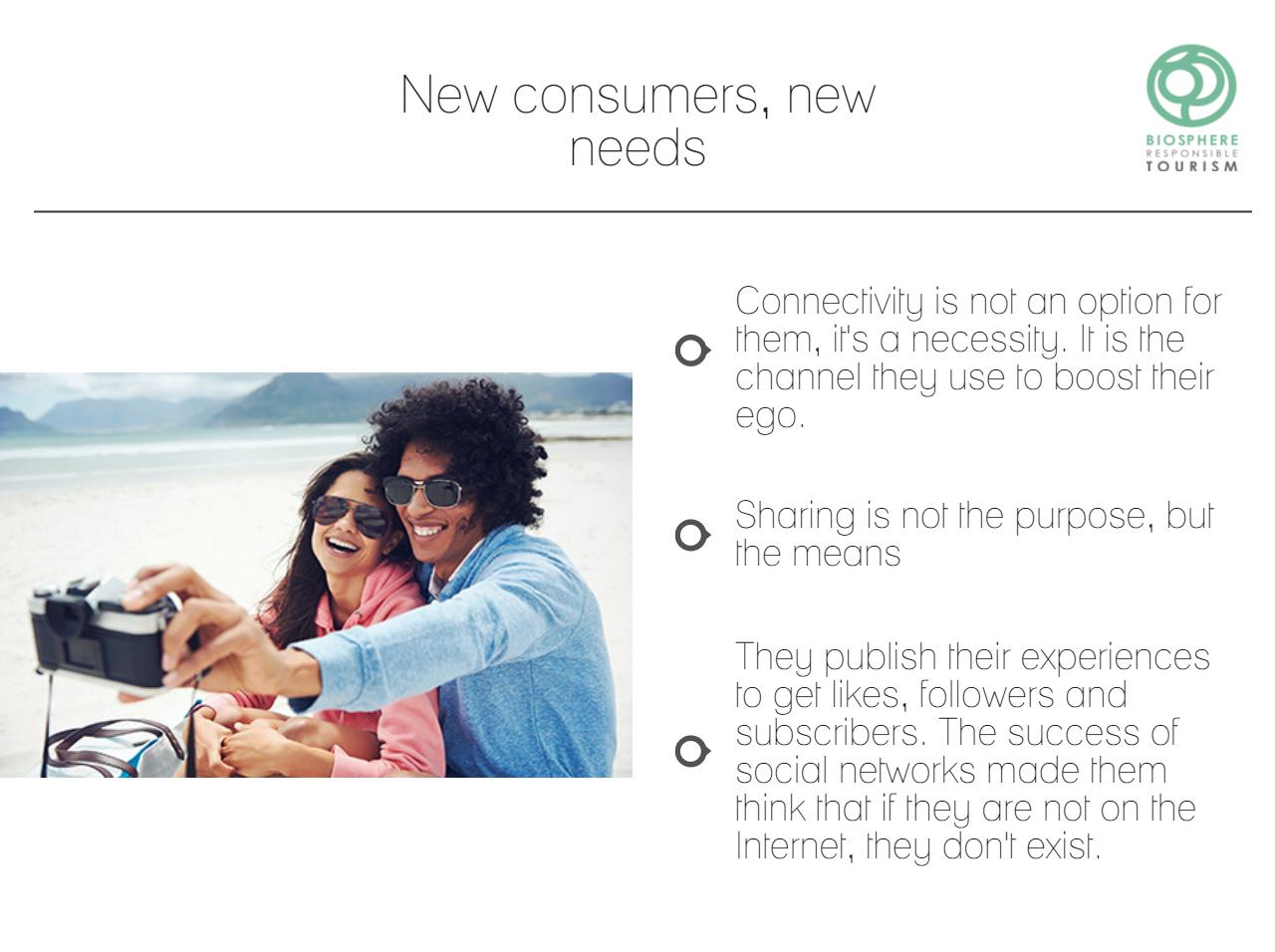 And of course, the traditional tourism products will not help them achieve the status they are craving for. They know that a picture on the sunbed of a hotel will not always help them increase their followers. But a selfie from a spectacular cliff you only get after hours of trekking, however, will give them likes to bathe in. The more extravagant and exotic is the experience they live, the more social recognition they will obtain. Television was the communication channel that hit previous generations, but messages were limited to what companies with money to pay for their marketing wanted to convey. Now, with the advent of the Internet, communication is no longer owned by companies. In an net world where everyone has their own channel of communication (and therefore, self-promotion), among many millions of messages we only get to hear the ones that get our attention. To be heard and get the online social success they need, the millennials can only resort to shocking. 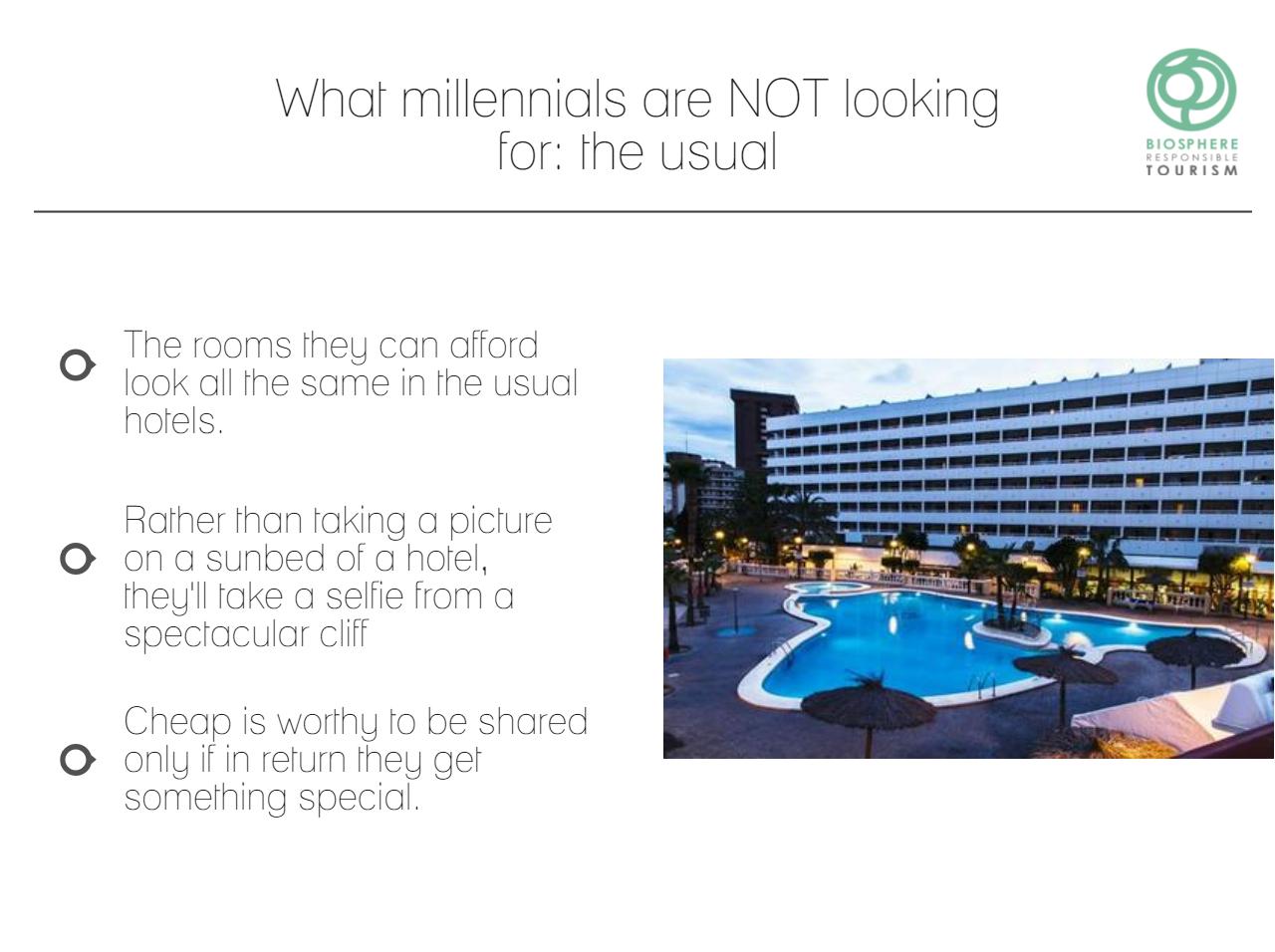 However, the boredom of the new generations towards traditional tourism products, their ever greater willingness to live travel experiences that are not based on convenience and their constant quest to surprise others in their social networks are not the only thing that tipped the balance in recent years towards tourism of experiences. Above all we must not forget the crossroads they are facing: the years of prosperity extended their adolescence and now the subsequent recession has caused them a feeling of rejection towards large corporations and the culture that these companies spread. Millennials hate feeling cheated. A millennial will never be satisfied with the first option when choosing flight or selecting accommodations. They know that their beloved technology, which changed forever their preferred industries (music, film and television) approaches now the tourist industry, and that the proliferation of search engines and online comparators give them more power than ever as consumers. None of them will rent a room in a hotel without checking its reviews on TripAdvisor first. And mass tourism hotels do not get as many stars as the ones that help them get viral in the internet. 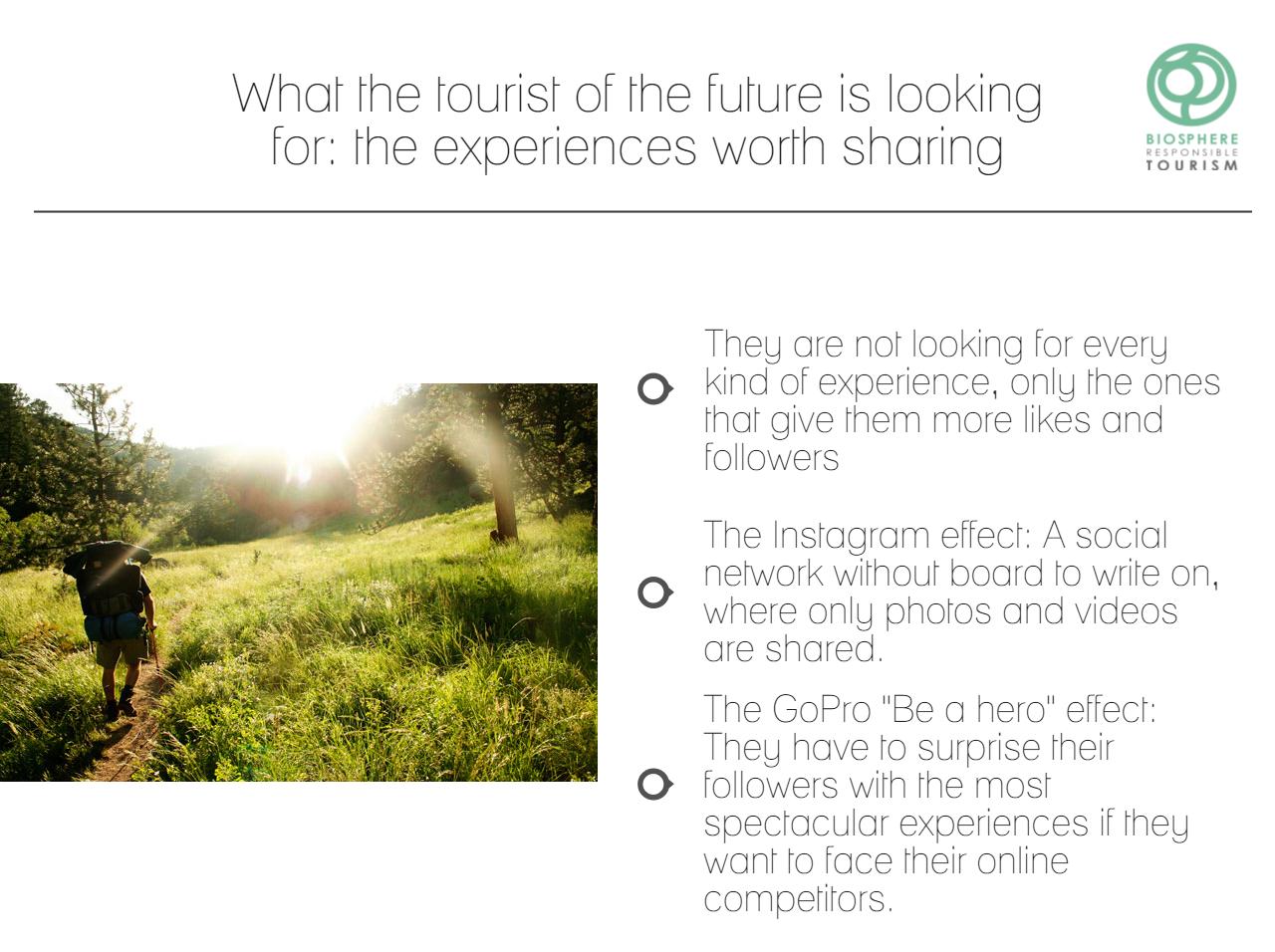 But to believe that this behavior is exclusive of younger generations might a mistake. Older generations are not immune to technological progress by the simple fact of being older. Every year the rate of facebook users grows over 55%, as every year that goes by technology forces us to use it. The pace of innovation makes old consumer channels so outdated that it becomes impossible to continue using them. The fact that today is practically insignificant the number of consumers who don't buy their flights through Internet should suffice as an example of how all demographic cohorts end up embracing new technologies if they are forced to do so. And giants like Google, Facebook or Apple will surely keep forcing us by offering exceptional usability and profitability. 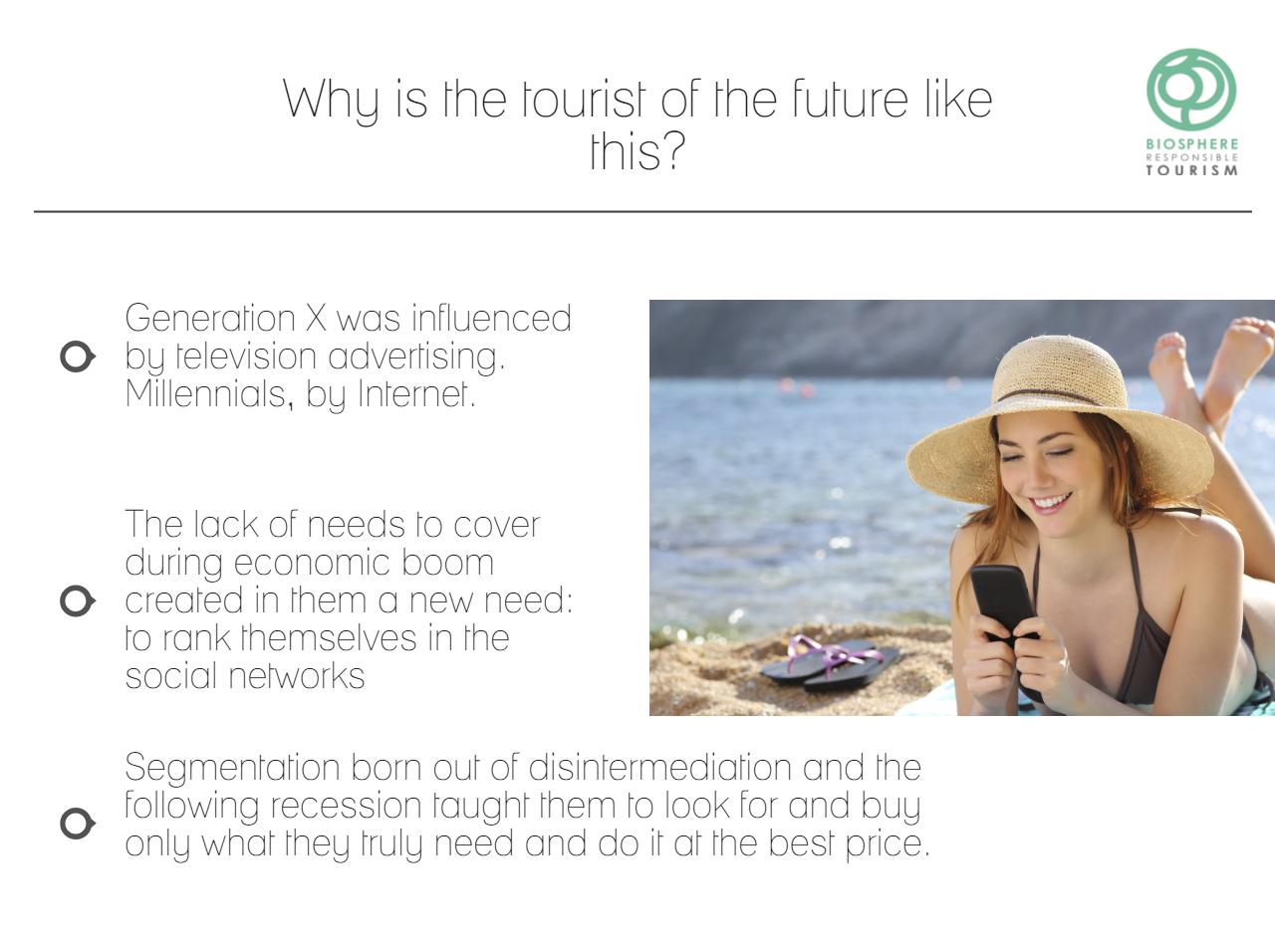 To this change in consumer preferences of tourists must also be added the multiplier effect that will have this gradual turnaround. The fact that traditional tourist destinations that have so far offered only sun and beach for mass tourism are losing customers every day for destinations that offer more complete experiences should not be seen as something trivial. Every euro and every dollar that is not being spend on traditional destinations but on the new destinations is a further step towards the consolidation of the latter. Soon they will not only offer the kind of tourism that are increasingly demanding consumers, but also offer the best price. As the flow of tourists and capital move towards them, new destinations invest in infrastructure to ensure the optimization of its economic returns. A performance that will not arithmetically change as does the sun and beach destinations' (constrained by price competitiveness as the only way to improve margins), but will do so exponentially as a result of the equitable distribution of the economic impact of tourists in the destination, implicit in this new kind of tourism. 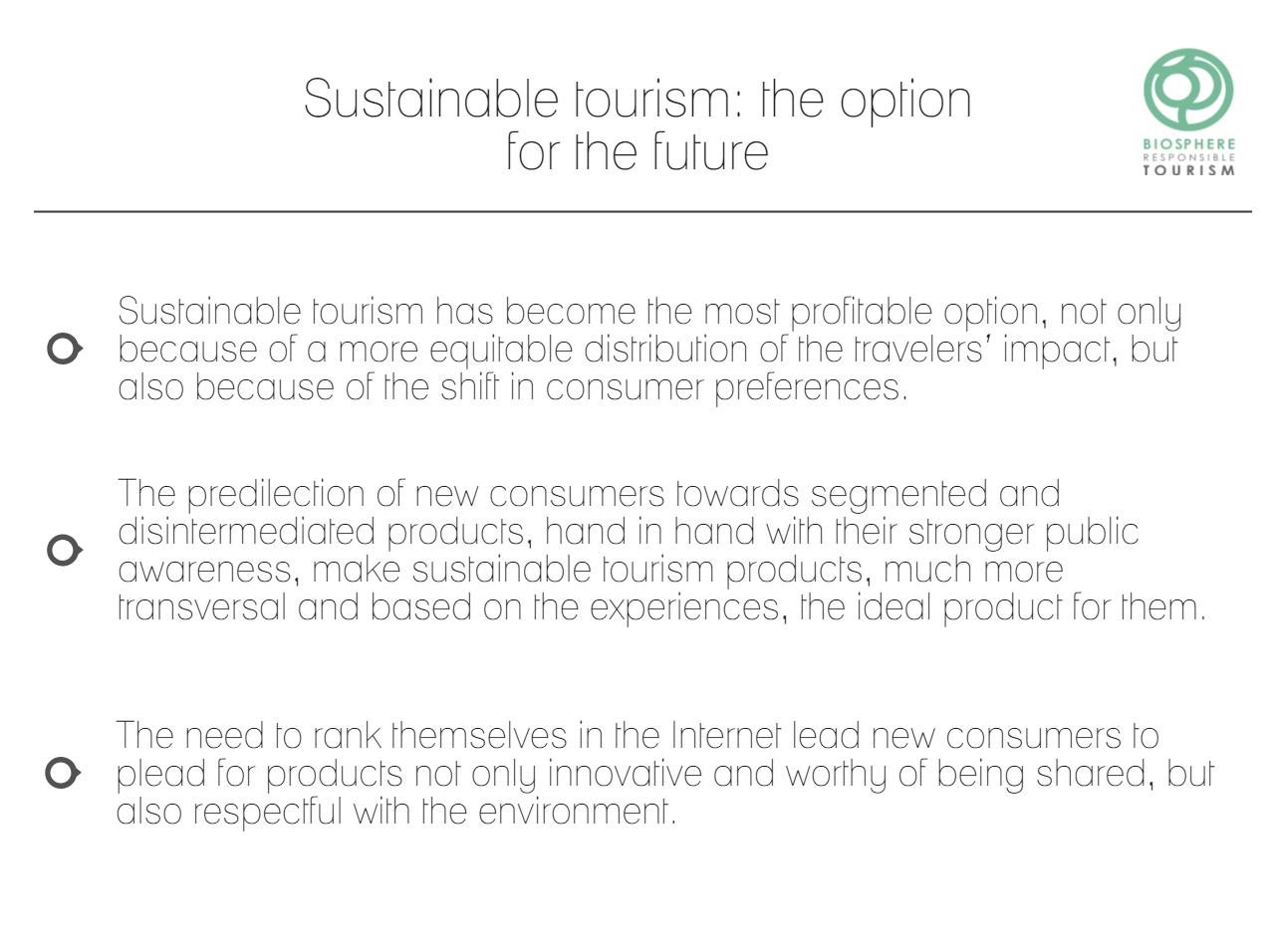 The traditional tourism model of sun and beach is also too dependent on the price to be competitive. Reason why there is some relief in the current instability of rival destinations (Egypt, Tunisia, etc.) with a less established tourism but still likely to become serious competitors in the future. The only way to avoid the servitude towards price is by adding more features to the traditional range of products and services. Offering something else. Something that would made tourists no longer see price as a factor when choosing our destination. Betting on city breaks, rural escapes, ecotourism, or any of the experiences that are being increasingly demanded by travelers is the only way to improve competitiveness not only via prices, but also through a more equitable distribution of the travelers’ economic impact.