The Regional entity of Tourism(ETR) of Alentejo and Ribatejo received the diploma fof the “Certification Biosphere Accommodation “ from the Responsible Tourism Institute abnd recognized by the Unesco and the World Organization of Tourism. 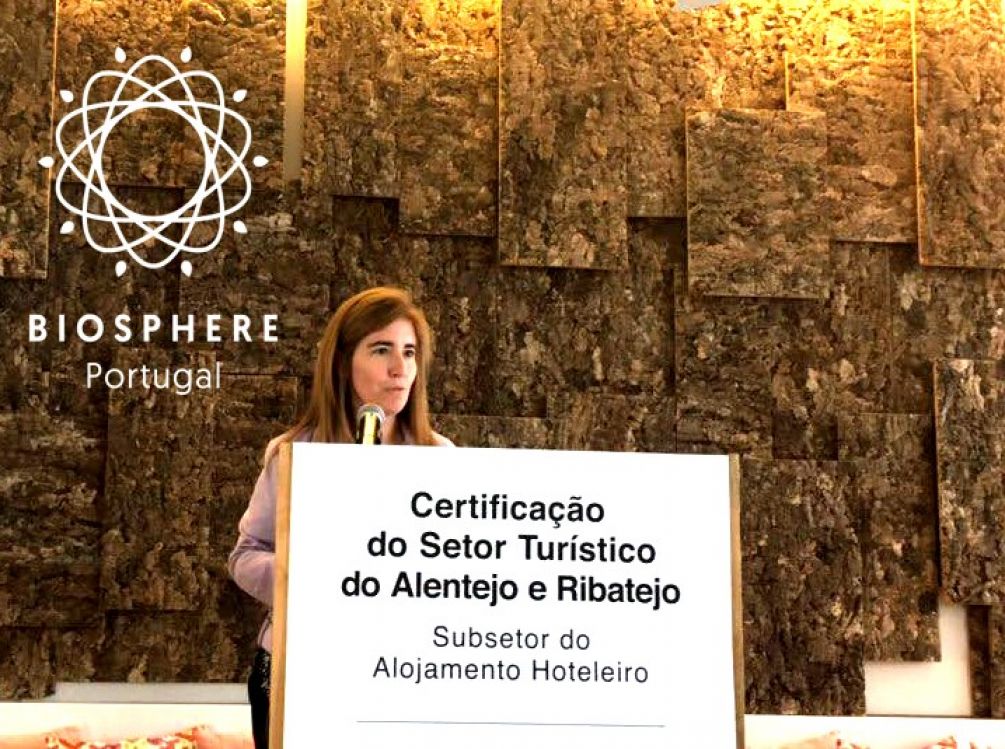 The ceremony was celebrated in the Ecork Hotel, during the final seminar of the “Certification of the Touristic Sector of Alentejo and Ribatejo- subsection of Hotel Accommodation, being present the secretary of the State of Tourism, Ana Mendes Godinho.

13 units of accommodations of the above-mentioned regions received the Biosphere Responsible Tourism Certification.

The Hotel Bevavente, the Ecork, theConvent D'Alter, Don Vasco, José Regio, The Mount of the Provença, the Port Covo, That of the Palm, Vila Park, the TownAljustrel, the Santarém and Victoria Stonewere the accommodations emphasized in the  meeting.

Apart from this initiative, the secretary of the State of Tourism emphasize the fact that “there are 13 Portuguese hotels that have the  certification of sustainable Tourism of the Biosphere, explaining that there are the thirteen first ones  of the world that  have in the certification a new indicator that is the sustainability  in the business, which goes far beyond the sustainability  in  the environmental and social aspects.

In accordance with Ann Mendes Godinho, here is included the high worry if business is sustainable, since only in this way we can have an activity that manages to develop the territory and create employment opportunities that are some form sustainable throught the year and not only when is demanded.

From his particular point of view, “this certification is particularly important, in that its positioned us internationally because we are between the 13 first hotels of the world that has this requisite and this help us to have more content and argument of promotion of the destination Alentejo/Ribatejo”. Related to the last data of the INE at national level, Ana Mendes Godinho underlined the fact that “we have had a growth of 11,8 percent of the touristic income in February 2018” highlighting that after being 2017 one year with historical results, this year has become possible to keep on growing over these two digits.

The secretary of the State of Tourism mentioned that “Alentejo is the region that increases at most in indicators of overnight stays and guests in the country, showing that we are managing to diversify our offer in order to gain tourists throughout the country and the year.

The Alentejo ETR was the first region in doing   the Biosphere Certification Process, explained by the president of Tourism of Alentejo how this process functioned.

According to Antonio Cena de Silva, “we began this certification process in 2015 “explaining that “in this moment, we were right that the certification was a decisive strategic point in the affirmation of the tourist destinations, emphasizing that nowadays the tourist is more informed, more learned and therefore is going to demand in the future all that should have a quality stamp.

He told also, that “we are the first region in the country and one of the first three in Europe in obtaining this certificate”, admitting that” this a pride motive”.

Ceia de Silva underlined that “we are the first ERT in the whole world in having the units certified also in the mastery of the business management and that is very important for all, because we are qualifying, and the target of the certification is to have better accommodation units.

It clarified also that “now the first 13 certificates were delivered, but in whole there will be 51 certified units, being this a process that is going to continue even at the end of the next year.