The 19 and 20 of October, Lanzarote will become the global epicenter of Sustainable Tourism

The event will gather top experts and the highest national and international tourism authorities. The Secretary of State for Tourism, Matilde Asián, UNWTO Secretary-Generaly Taleb Rifai, and the President of CEHAT, Joan Molas, are expected to attend. 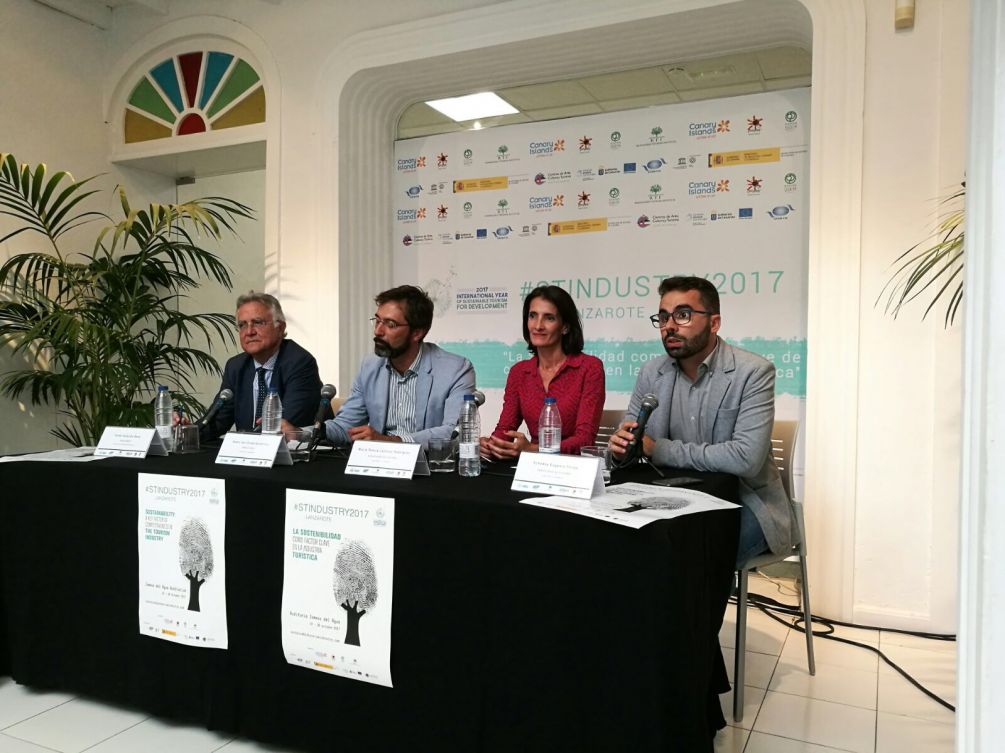 Lanzarote will become the global epicenter of sustainable tourism during the next 19 and 20 of October with the celebration of the International Conference "Sustainability: A key factor of Competitiveness in the tourism industry". This major event is promoted by the Responsible Tourism Institute (RTI) and the Society of Foreign Promotion of Lanzarote (SPEL-Lanzarote Tourism) and will gather speakers of the highest level and the most representative specialists in responsible tourism.

The event was announced during the press conference offered today at the CIC El Almacén by the president of the Cabildo de Lanzarote, Pedro San Ginés, and the president of the Responsible Tourism Institute (RTI), Tomás Azcárate, along with the Minister of Tourism of the first Insular Corporation, Echedey Eugenio, and the Minister of Tourism, Culture and Sports of the Government of the Canary ISlands, Mariate Lorenzo.

The incomparable Jameos del Agua Auditorium will be the chosen venue for the holding of this International Conference. Under the generic framework of the leading role that the tourism industry should play in sustainable destinations, the event will address several thematic blocks that will be developed in the form of round tables. The conclusions will serve as input for the approval by the RTI of a series of global criteria for tourism sustainability adapted to the 17 United Nations Sustainable Development Goals (SDG) and to the guidelines emanating from the World Charter for Sustainable Tourism +20. This criteria will be used as a real and tangible measurement tool of the environmental, cultural and socio-economic responsibility of the industry and of the participants in the tourism sector.

After thanking RTI for choosing Lanzarote to host this event, Pedro San Ginés described as "extraordinary" the importance of "holding this Conference following the declaration of 2017 as' International Year of Sustainable Tourism for Development by the UN, since it means a clear support and an express recognition to our environmental trajectory. It projects us abroad as a genuine destination with its own identity, and places us in the focus of world attention as a reference of exemplary destinations In the field of sustainable development linked to tourism".

The president of the Cabildo highlighted "the valorization of what we have been for a long time: an identity linked to the distinction that UNESCO gave us in 1993 as a Biosphere Reserve; And to the new acknowledgments received, more recent in time, which are the best endorsement of the route in terms of sustainability followed by the island"; emphasizing in this sense that "Lanzarote became in 2015 one of the first destinations in the world to receive the prestigious Biosphere Responsible Tourism certification, under the auspices of the Global Sustainable Tourism Council (GSTC), which represents the worldwide recognition of Unesco and the World Tourism Organization (WTO).

The president of RTI, Tomás Azcárate, recalled that 2017 has been proclaimed by the General Assembly of the United Nations as International Year of Sustainable Tourism for Development, with the objective of "expanding the contribution of tourism to the 17 Sustainable Development Goals of United Nations, as well as raising awareness about the true dimensions of a sector whose contribution to Sustainable Development is crucial. " Azcárate said that "sustainability has become one of the most important elements to take into account at a global level in the choice of a destination by the tourist."

The president of RTI said that at this conference, "professionals and agents of the sector are going to approve the criteria that must be met by the tourism industry as a whole to guarantee tourists that they consume products whose competitiveness is based on their sustainability."

The RTI considers that Lanzarote's commitment to sustainable tourism has historically led it for more than twenty years to exercise "a clear international leadership in the development of a tourism industry based on sustainability" and recalled that "in 1995, with the celebration of the historic Sustainable Tourism Conference, from which the World Charter for Sustainable Tourism was born, Lanzarote initiated the global debate on the means and instruments necessary for the conversion towards sustainable tourism not only on the island, but also in the whole world. As a result of this Conference, in 1997 the RTI was created, whose first certified hotels were located in Lanzarote, some of which remain.

Thus, for two days, the Conference will bring together the main tour operators and airlines of the international tourist market, representatives at the highest level of hotel management, as well as senior UNWTO and Unesco leaders, together with political figures and diplomats, among other outstanding representatives of the national and international panorama of the tourist area. In this regard, in addition to the President of the Government of the Canary Islands, Fernando Clavijo, the event is expected to have the presence of the Secretary of State for Tourism, Matilde Asián; The Secretary General of the World Tourism Organization (WTO), Taleb Rifai, the president of the Spanish Confederation of Hotels and Holiday Accommodation (CEHAT), Joan Molas, or the CEO of Heathrow Airport, John Holland-Kaye. Also invited to participate in the event are Turespaña's general director, Manuel Butler, and the executive director of the Global Sustainable Tourism Council, Erika Harms, among others.

The event will consist of conferences and round tables where the experts will focus their subject of analysis in various thematic blocks, among which stand out 'Sustainability and Tourism competitiveness: the perspective from the industry'; 'Marketing of Sustainability: the vision of the markets'; 'Innovation and Technology for Sustainability'; 'Models of Industry and Benefits for the Local Community' or 'The Measurement of Sustainability and the 17 SDG'. The Conference will also include the Office of the Biosphere Reserve of the Cabildo of Lanzarote and the Geopark Lanzarote and Chinijo Archipelago.

Héctor Fernández, SPEL's CEO, also attended the presentation of the Conference, as well as numerous partners and sponsors of Lanzarote Tourism. The objectives of the Conference are to engage companies in the sector with the strategic role that sustainability will play in consolidating a sustainable and stable competitive positioning in the future world tourism market; and providing a model of sustainability applied to the tourism industry that can facilitate its rapid integration into the operational management of the same.